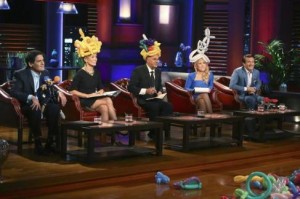 Ben Alexander took an unusual industry and went national. Now he’ll be appearing Friday evening January 17 to make a proposal to the multimillionaire and billionaire sharks on ABC’s Shark Tank. Whether he gets eaten alive or not is irrelevant since the exposure will be extraordinary–the show has around 7.5 million viewers.

Alexander’s company, Balloon Distractions, has specialized in bringing restaurants entertainment in the form of trained balloon artists since 2003. The goal is to keep the children distracted with fun and balloons until the meal arrives. Presently, BD is in over 30 markets across the country and he hopes to grow to 300. Restaurant chains include Texas Roadhouse, Applebee’s, IHOP and Chili’s, to name a few.

There are different ways to participate as an independent contractor in his organization: as a Trainer, Regional Partner or an Artist and it is possible the titles can overlap. Yes, BD gets a fee for each restaurant, but the RP develops his own region including finding the artists, and can determine the fees that the restaurant clients pay. Most of his artists are stay-at-home moms, college students and retirees. In addition, BD handles the business end of things, like all the training, quality control, background checks, billing, payroll and scheduling. He also offers college internships. Check out his site for details.

Alexander comes from a background as colorful and diverse as the balloon shapes he makes including going to college on an opera scholarship, teaching English in Taiwan, volunteer firefighter, and sales. He’s been a Rotary member for five years and has been to Honduras installing water filters in remote villages with Pure Water for the World. “My goal is to install 1000 per year by my 50th birthday,” he said. The filters cost $60 each.

He and his wife, who he met while teaching in Taiwan, have been married 16 years and have two teenage daughters. ”My wife and my daughters are my greatest blessing,” he said. In fact, now one of his daughters entertains with him.

It appears Alexander may be liked in many areas of his life, however where he may not be so popular is within the balloon entertainment and clowning circles, as he is seen as offering direct and often much lower priced competition, forcing the going rates way down.

“I used to be a real cocky, arrogant bastard. I made the mistake of thinking I was a business genius,” Alexander said of his attitudes several years ago. He reflected perhaps he had to be on the cocky side to get his business started when he did, but unless there was the willingness to grow and become a better person, he would not be able to move to the next level.

“I learned if you’re not humble, the world will humble you.” And even as the CEO of his company, which pulls in on average over $550k a year, he continues to entertain at restaurants, it keeps his head from getting too big. “You can’t feel like a big shot when you’re twisting a balloon butterfly!”

He’s attributed his success to his family, friends, associates and team. “I’ve surrounded myself with really good people. I’m sure there are a million things I can do better,” he said. “I delegate the stuff I’m not good at. I’ve learned it’s good to have a human brain on various tasks, but it doesn’t have to be mine.”

Being able to work well with kids is a nonnegotiable requirement of all his independent contractors, who although they are a very demographically diverse group all have a similar trait. “I’ve found people who are good with children trend toward the wonderful!” he said.

Will he get eaten alive or not? We’ll have to watch to find out. I’ll get a post-show reaction from Alexander, so stay tuned.