WAM! Women Around Me!

Robin Bengtson: A Human and Her Dogs 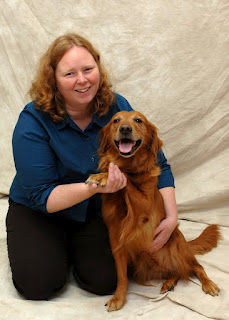 “Dogs aren’t my whole life…
but they make my life whole.”

Robin is a business owner that specializes and works with dogs. If you’re going to add a member (two-legged or four!) to your family, she can assist you with a smooth adjustment and transition. If your dog needs customized training for a particular issue, she’s the one to call. Know a rescue dog that may need some help with behavior? Yep, give Robin a holler. Want to see dogs performing tricks? Robin’s star, appropriately named Starlight, and seen pictured with her, will perform about 30 tricks in an hour and sometimes performs with a couple other dogs in entertainment and educational programs.

Here Robin discusses the difficult balancing act of personal versus professional obligations, the problem of giving away too much of her expertise and her desire to learn to dance with her dogs. She is bright and lovely and it is my pleasure to introduce her to you.

Holly: What would you call yourself and what you do?
Robin: I am a dog trainer and I also entertain with my dogs at schools, libraries and parties.

Holly: What area do you reside and/ or work?
Robin: I live in Lake Villa, IL and work up to two hours from my home.

Holly: When were your first experiences with dogs?
Robin: When I was little, my grandma had lots of dogs over the years and they had to stay off of furniture and out of the carpeted areas and we taught them tricks like ‘roll over’ and ‘shake’. I was seven years old. My aunts would do it first and I would imitate. They said, “When you grow up, you will be a dog trainer.”

Holly: Tell me about your family and whether or not they are ‘dog’ people.
Robin: My children are all adults 🙂 Young man of thirty years old, another young man almost 24 and my daughter who is 21. She is a dog person. She went with me to the place where I apprenticed. She helped me train most of the tricks and assists me in my show (our show)

My husband was a cat person, but now he is happy around dogs and pays attention to anything ‘dog’ so he can tell me about it.

Holly: What do you think of shows like Cesar Milan’s “Dog Whisperer”?
Robin: I like some of his stuff and watch his show to analyze it. I rarely teach my dog owning students to use his methods because I think it takes a certain personality to be successful with Cesar’s style. For some people, it works and for others, it antagonizes the dog to bite the person.

Holly: What are some of the popular dog training methods? I notice on your site you mention modeling, classical conditioning and more.
Robin: There are styles such as Koehler Method of Dog Training where you use chain collars and methodical training methods and eventually correct the well-learned dog. It is fair correction to dogs who have learned the game. I use many things from that style. Praise is used in this method as the reinforcer. Trouble is that some dogs don’t care if you praise them.

Positive reinforcement means that you add something at the end of the behavior to let the dog know that what they did before was good.

I might feed a dog after they sit, or I might throw a ball after they sit. If I try to feed a dog something they don’t like and maybe they aren’t hungry, it is not going to be much of a reinforcer. So, I observe the dog and the things they think are important. Maybe they like a car ride, I use that as a reinforcer.

(editor’s note: as Robin explained, these are but a few methods.)

Holly: What in particular or in general has helped you grow in your avocation to become who you are today compared to when you began?
Robin: I apprenticed with a dog trainer in Chicago. When he told me that I was ready to go and start my business because he believed that I had learned more already than many dogs trainers already in business, I didn’t believe him. He also believed that one learns a huge amount when working for themselves and there is no time like the present to get started on that journey. Looking back, I realize he was right. I still sought out other great dog trainers to learn from and was always able to call my mentor, if I needed help.

Holly: What critical decisions did you have to make along the way to becoming who you are today?
Robin: Deciding to advertise that we were available to entertain at parties was a critical decision that took some encouragement from Cindy Rippa, a Dog Rescuer. I wanted so badly to entertain with my dogs; and, when she believed in me, I got the courage to do it.

Holly: What are some of the major challenges you face or have faced?
Robin: There are some places I need to call to find out if they have an interest
in my program and after many “No” responses, I have a difficult time
picking that phone back up to make yet another call.

Holly: What mistakes have you made and what have you learned?
Robin: Learning to notice early in a conversation when people are asking for free advice so I could give them enough to know that I could help them. I want to help people so much that I used to forget that I was also doing this to earn a living. I had to stop giving away the store.

Holly: How do you balance your professional and personal life?
Robin: No matter what work I am doing, this is always a challenge. I get a little bit obsessed about my work. My family likes to help in my dog business so that works out well.

Last December, I had a very difficult situation arise. We had a death in the family and on the day that was picked for the memorial, I already had a Dog Performance scheduled with a big corporation. Everyone wanted me to cancel the Performance so I could go to the memorial service at their chosen time. I just couldn’t cancel it. People counted on me. I arranged for the Performance to be a little earlier and begged the extended family to have the memorial a half hour later. Everyone else was able to
take off work but me. It was very difficult.

Holly: What trainers or other people have you looked up to, respected, and/or admired?
Robin: Captain Arthur Haggerty was on Phil Donahue many years ago with his trick trained dogs. When I saw him, I decided that I would one day do what he did.

Bob Bailey was an animal trainer in the 1950’s whose company ABE was for training all kinds of animals and whose work was used in the war. He trained cats with cameras to spy in airports, and pigeons to carry messages, and dolphins to do things in the open ocean that helped the war. He did these things all with positive reinforcements. Bob Bailey had lots of scientific studies and evidence of his work that all burned in a house fire. So sad.

Holly: Do you, yourself, ever enlist the services of a dog trainer for your own dogs?
Robin: I have taken an agility class. I have taken other people’s dogs through classes,
so I could see how other trainers handle problem situations. When I have a problem
with one of my own dogs, I imagine someone else asking me for help with that situation
with their dog and then I figure out how to help “them”. Amazingly enough, I usually have the answer for my own dog’s issue after that.

Cathie Sabin from BC Dog Training has allowed me to take her advanced classes with
my dogs so I could refresh and maintain the obedience. Having my dog in a “downstay” in the corner while I work another dog through her “calls” really helps.

Holly: How do you refresh, recharge and stay motivated?
Robin: Teaching my dogs a new trick recharges me. It gives me great joy to “play/work” with my own dogs.

Holly: What inspires you?
Robin: People who dance with their dogs. I think I will take a class in that this spring.
My daughter, Elizabeth Bengtson, inspires me. She wants me to be on David Letterman’s ‘Stupid Pet Tricks’. Haha, I don’t think of any of our tricks as stupid.

Holly: Dancing with your dog!? What is that all about?
Robin: Search Youtube for “Carolyn Scott” and “Rookie” Here is one link for them
Carolyn Scott & Rookie

Holly: (after viewing video) I love that! It’s like “Dancing with the Stars” but with DOGS!
What song would you use and who would you dance with?
Robin: That is why I never do it….I can’t think of a song. Maybe I should have a hula song LOL. I think Cedar would be a good dog for dancing since she is young and I taught her to go backwards around me and she sometimes flips like Rookie.

Holly: What advice might you have for someone starting out in your profession or avocation?
Robin: Volunteer to work with someone in their kennel. Observe dogs in dog parks. Go to other Trainer’s classes and observe. Learn from all Trainers, not just positive reinforcement trainers.

Holly: In what ways do you develop awareness of your business? Robin: Send out flyers, Show and Tell at schools, Demo at Lambs Farm, YouTube videos, my website, giving out cards or pens at my library shows with my website printed on them, and encouraging the kids to watch our videos and send us ideas about tricks or dog jokes though emails.

Holly: Have you ever had a particularly funny or embarrassing moment, and if so, please share it!
Robin: I like to train dogs through movement. It was wet on the ground and I was training a 200 Pound dog who just wouldn’t move. I ran hoping his prey drive would kick in and he would run also. He didn’t budge and I fell on my butt in my driveway.

If you’d like to see Starlight performing for a young audience, visit
her site page the video is on here