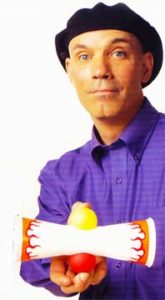 Barry Friedman, aka Barry Raspyni and one half of the entertainment duo the Raspyni Brothers, has been performing since the early 80’s. The Raspyni Brothers have appeared on national television more than 200 times, have toured as an opening act for dozens of celebrities like Tony Bennett, Robin Williams, Dennis Miller and Billy Crystal and are four-time World Juggling Champions. ( see www.Raspyni.com )

Not only that, but Friedman, along with Daniel Holzman, aka Dan Raspyni, provides entertainment to corporate America booking over 100 events a year. According to one of the speaking bureaus they are booked through, Premiere Speakers Bureau, a keynote commands $15,000, while a half day booking is $22,500.

“Fortune Magazine has a list of companies they call the Fortune 500. The Raspyni Brothers have a list of corporate clients they call the Fortunate 500,” said their site page listing some of the many corporations they have performed at. Corporate offerings include Headline Comedy; Customizations such as keynotes and product launches; and Workshops.

And on top of all that, Friedman has brought all of his experience and wisdom together in a membership site to assist other performers like comedians, comedy acts and bands book more corporate events called Get More Corporate Gigs (see www.GetMoreCorporateGigs.com)

Friedman has been performing at corporate events since 1988. “I did my first corporate show and I thought I had gone to heaven. I was in and out in an hour and had a pay check that made my hands shake. That one hour paid the same as 4 weekends of hat passing at a festival, 3 weeks at a comedy club, or 2 weeks on a cruise ship. And I was back home the same night!” he exclaimed, as excerpted from his Get More Corporate Gigs site

As a motivator himself, Friedman enjoys new projects and moving on to something new. “GetMoreCorporateGigs.com was a project that I started in January of this year and I sat on it for almost a year before I got it going. What got me motivated was realizing time was slipping by,” he said.

“For me and so many people in the world,” Friedman continued,  “progress and getting our ideas out into the world is a real challenge, so I’m being a model in that and every week on the membership site I get in there and I punch people in the head and give them new ideas and ways to do things; question why they’re getting lazy, ask them what’s at risk for not doing it and just wake them up!”

Although he has come through many kinds of situations and experiences, one big challenge has been dealing with a lack of formal education, he said. “I have a degree here on my wall that I made myself from the University of Life that says ‘Barry David Friedman, for completion of the graduation requirements for everything he needs to be successful.’ So, the big challenge for me has really been convincing myself, getting out of my own way and letting my brilliance shine.”

Some of the ways he has been shining is by allowing what he has done in the past 27 years to be of value and sharing it with others through his writing and through his membership site and by motivating people.  “You don’t always have to go the traditional route to be successful,” he said.

“I love running Get More Corporate Gigs.com, I have an amazing community there of entertainers from all over the world who have their show down, but we’re working on the last eight letters of show business. We’re working all on the business. That’s what we’re doing inside the membership site,” he said.

“I’m also working on a series of online classes in all kinds of different niches,” he said, “from contracting to mosaic, to comedy writing to creative writing, to fishing. And helping people who are experts  bring their message to audiences online and who are ready to pay for their knowledge.”

Where does Friedman see himself in five years? “I have a big sign on my office wall that says ‘I will be a cash millionaire by the time I turn 50’,” he said. “I’m not going to count all the assets I have, just expendable cash. In five years, I’m working everyday. Every minute I’m in front of the computer I’m working towards that goal. Being successful, being able to work more when I want, vacation more, help provide greater service to a lot of people all over the world through my membership sites and helping people get what they want out of their lives.”

Despite all of his years performing he still gets a case of the butterflies before he goes on. “I still do and I think it’s healthy,” he said. “I work at corporate meetings now that are high pressure events for companies that probably spend a minimum of a million dollars on the conference and they‘re handing attendees over to me for an hour,” he said. “Dan and I have some rituals we go through backstage. The first thing we say is ‘we’re not saving any children’s lives here tonight’” Then they realize the first step is to go on, so they go on, he said. “It makes me sharper and better and more ready. Never phoning it in,” he said.